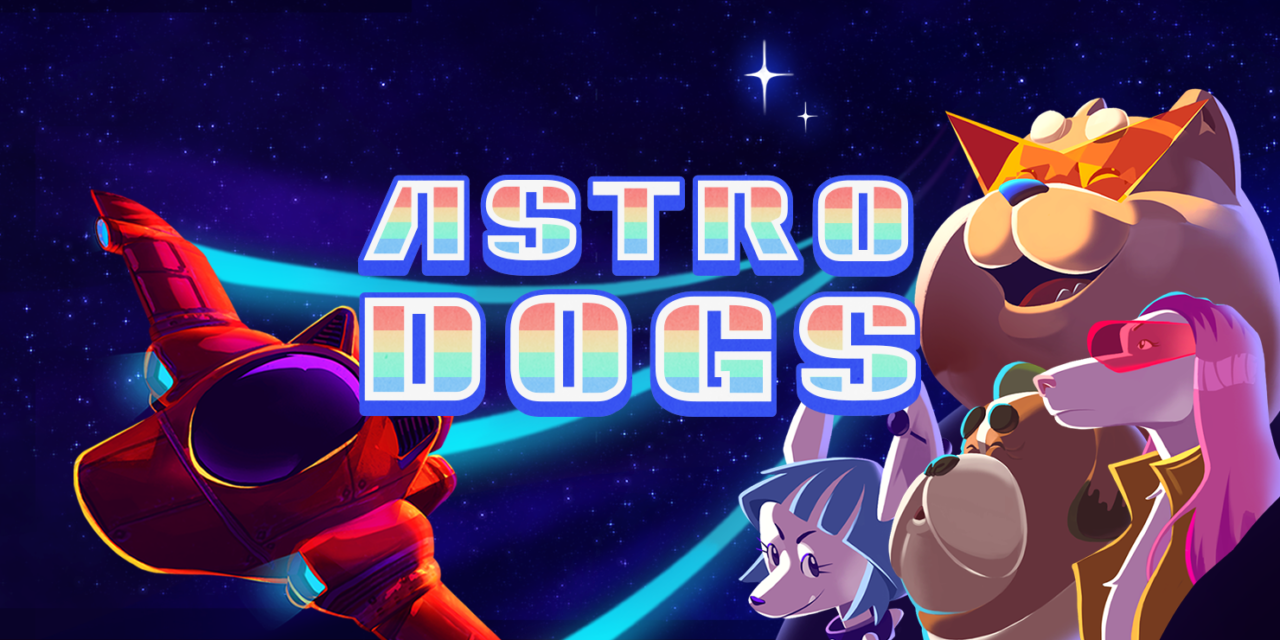 It’s weird how certain game genres were really prolific back in the day, but then later just faded into obscurity. Run ‘n’ Guns, 3D Collectathons, Survival Horror, and Rails Shooters (amongst others) were all immensely popular back in their heyday, but one day they fell out of favour. Some of those genres have made a resurgence in recent years, whereas others just haven’t.

We have seen some rails shooters in the modern era, with the recent remake of Panzer Dragoon being a noteworthy example; yet Nintendo’s own franchise, Star Fox, has been seemingly laid dormant with them not really knowing what to do with it.

As a huge fan of the genre, it pleased me to see Dynamic Media Triad announce Astrodogs, which appeared to be Star Fox but with dogs. Well, … different dogs, at least.

Do these mutts deserve a treat, or should they go the way of Old Yeller?

Many thanks to Dynamic Media Triad for the review code.

PANZER DOGOON
The galaxy is at peace, and so are the Astrodogs team who are having a nap like good little doggies. At least, they were until the ship’s sirens suddenly started blaring. It turns out that the mega corporation WOOFER has started attacking planets all over the solar system. It’s up to you, as the main pilot of Astrodogs, to man (or rather, dog) the legendary Red Paw and put an end to all this trouble.

It’s a simple setup, although you’ll never really notice any of the story going on around you – but that’s ok. What the game lacks in narrative, it more than makes up for in charm. Right from the opening, you can tell that a lot of love has been poured into this game. The cartoonish visuals are gorgeous to behold, and everything has a humorous – almost meme-like – charm to it. The team all have their own personalities, although they lack actual voiceovers; considering most of the dialogue happens during heavy action sequences, the lack of a voice means that you’ll probably miss out on most of it. It’s a shame as the dialogue is really well written and full of the glorious dog puns that you’d expect from a game like this. 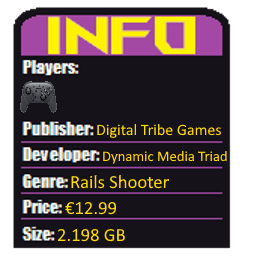 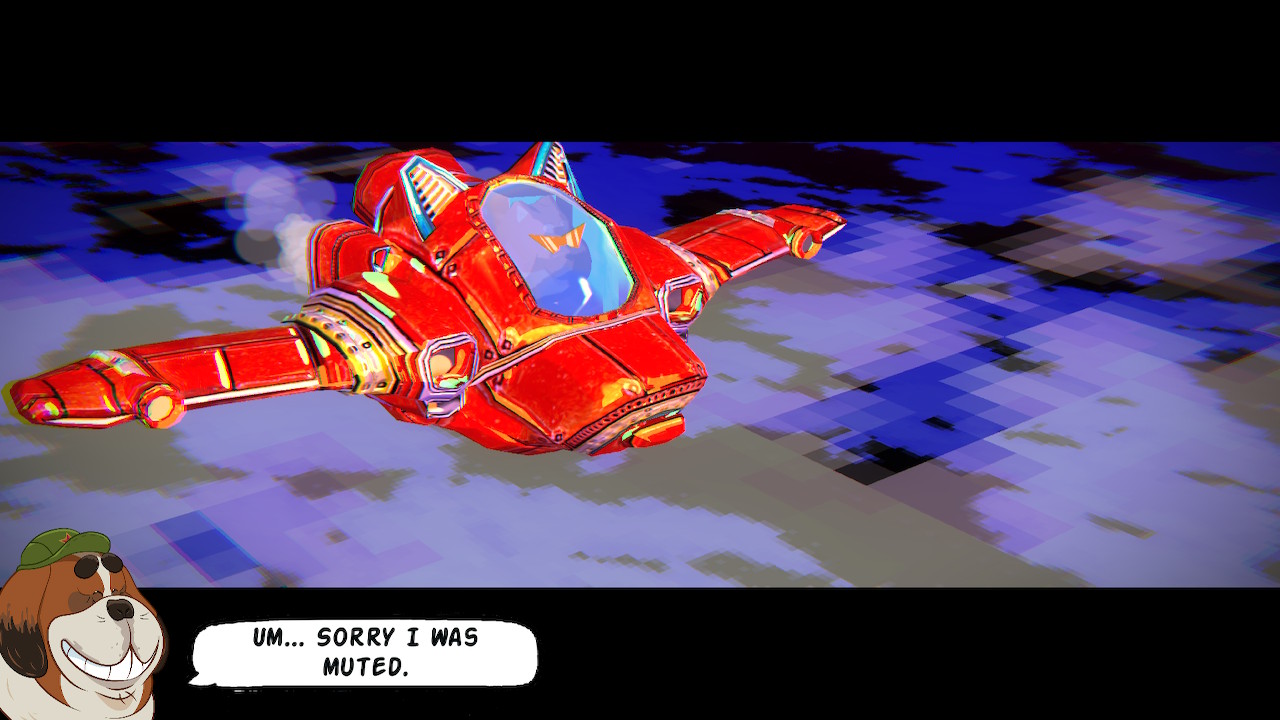 LYLAT PAWS
The beautiful visuals only get more impressive once the action starts. There are eleven unique worlds, including the tutorial and two unlockable levels, and every single one is absolutely stunning. From lush jungles to cyberspace, there’s a lot of visual variety and it’s all wonderful to look at. Even the main menu, whilst a little clunky to navigate, contains some stunning cartoonish visuals for you to gawp over. The visuals aren’t even the best part either, as the soundtrack is sublime and contains some very catchy action-packed tunes that will lodge itself into your subconscious for a long time. The Very Satellite music, which consists of dogs yapping the main melody, was a particular favourite – but in truth I loved them all.

Whilst the visuals are enough to make you fall in love with the game, the most important thing for a rails shooter to get right is the controls, and thankfully it plays almost as well as it looks. For those unfamiliar with the genre, you control a ship as it flies along a set path through the level. Control of your ship is limited to the X and Y axis, enabling you to avoid incoming fire and shoot at any enemies that come your way. The Red Paw is fast and responsive, although it does lack the ability to speed up and brake, which can make it difficult to take out some enemies when they get up in your face. This is alleviated somewhat by a pseudo-bullet time ability that can be used after collecting energy dropped by defeating enemies. This ability allows you to slow down time and use the gyro controls (or just the stick if you’re boring) to aim around you and take out your foes with ease. The gyro works incredibly well, and I found it extremely fun to use once I got to grips with it. There’s another meter that also seems to fill in a similar way, except this one is for your special weapons. These systems work quite well as you can effectively use one of them whilst the other recharges. Failing that, you have your primary attack as well as the obligatory barrel roll that can deflect bullets back at the enemy. In theory, the barrel roll is quite simple and forgiving to use, but when there are a million bullets coming your way, it’s not exactly something you should really rely on.

Each level has its own theming, which allows for certain unique gimmicks to be used as obstacles to bypass. The prison stage has security lasers that will try and fry you, whereas the jungle sees you flying into an underwater cave that you need to navigate. It’s always exciting to see what the next level has in store for you, and there’s not a stinker among them. Whilst there’s plenty of variety in the levels themselves, the enemy ships you’ll face will be pretty much the same. Different, more difficult, units do appear as you progress through the story, but they’re never thematically linked to the level you are playing. Most enemies are pretty neat, although some are bullet sponges that are best avoided – unless you’re going for a high score, of course. There are a lot of enemies, and you will find the game tough at first until you get used to all of the mechanics of the game, but thankfully there are rings scattered around which restore your health. If you play defensively and hit all of these, you should be able to make it through to the end in one piece.

Where the combat really shines though is with the boss levels. These types of games tend to have massive jawdropping boss fights, and Astrodogs is no exception. From huge squidlike beasts to a big ball of …. stuff(?), they’re both challenging and interesting. The game really tries to make some unique boss fights and most of them are a joy to fight (more on that later). The later boss fights feel more like puzzles rather than the usual bullet sponges, which forces you to figure out how to attack them rather than simply outsurviving them. The game graciously places a checkpoint before each boss too, so there’s no real pressure when encountering one of these behemoths for the first time. If you die, the checkpoint will even restore your health to full, but your score will be reset to zero. A small price to pay, for sure.

You’ll likely find that beating each level will award you with a pretty low grade after your first attempt, especially if you die at the boss, so you’ll probably want to go  through the levels again after beating the game in order to improve your score. Getting A ranks will reward you with bonus ships for you to pilot, including one that resembles an X-Wing for those Star Wars fans out there! For the very best, there’s also a special reward for anyone who can get S Ranks in everything. Bear in mind that even getting A ranks are extremely hard, so don’t expect to be unlocking any of them without some serious effort. As for those unlockable stages that I mentioned earlier, getting all A ranks will grant you access – or you can ‘simply’ do a deathless run of the game. Regardless of your choice, you’ll certainly need to practice!

For those with fewer skills but more perseverance, you can visit the gallery area and speak to the cat there to unlock some new paint jobs, or even purchase some extra lore for you to read up on. These are unlocked by spending the coins you earn on each level. It’s a nice way of adding some extra replay value, especially considering these types of game aren’t particularly long. They’re designed for replaying rather than a one-and-done playthrough, so this is a good way to encourage people to keep playing, even after the credits roll. 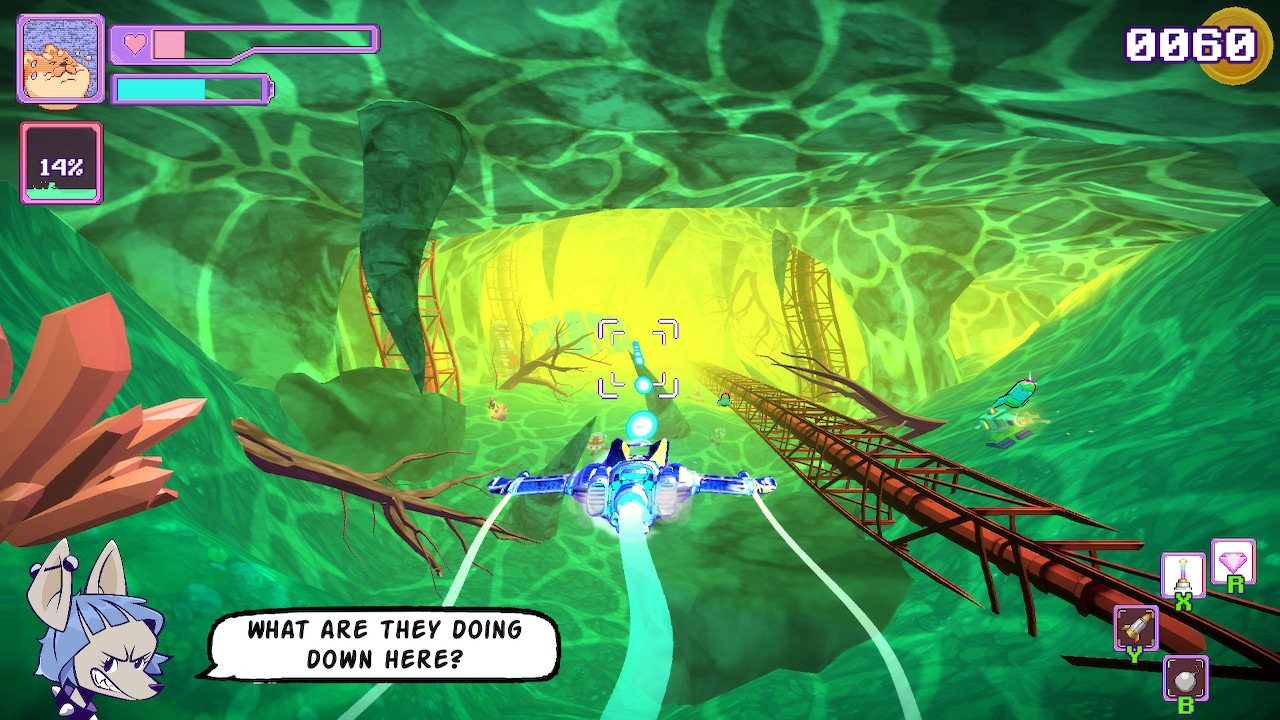 AFTER BARKER
Unfortunately, not everything is ca-fine in Astrodog as there are some issues holding it back – some of which will probably prove more problematic for some players rather than others. First of all, the game has a rather lacklustre tutorial that starts off really well, but then drifts off as soon as it gets down to weapons training. It encourages you to use the weapons, but there’s zero explanation as to how they work or what their benefits are. Considering the rest of the tutorial contains plenty of on-screen text from your poodle-pal, it’s odd that there’s absolutely no guidance with the weapons training. I was partway through the game before I realised that the purple thing assigned to the bumpers acts as a barrier that stops incoming missiles; and don’t get me started on the laser attack assigned to the X button – I never used it as I never found a use for it. The developers later advised me that the laser is able to penetrate everything, but the game offered no indication that it had any such functionality. A little more guidance in the tutorial would definitely have been appreciated.

This issue in itself is unfortunate, but not exactly a dealbreaker; the one thing that may put off a lot of people though is the difficulty. Astrodogs is a hard game – and I say that as a veteran of both the Panzer Dragoon and Star Fox titles. Getting used to how the game plays certainly helps, but there’s still no denying that this game is made for the hardcore rail-shooter enthusiast. Seasoned players like myself will probably find the game tough, but beatable; however, I can see many newcomers getting turned off by how brutal the game can be at times. I think that the game probably could have done with an easier difficulty to make it a little bit more accessible for people who don’t have experience with the genre – which is probably a lot of people these days. Whilst I didn’t have too much of an issue with the game once I got used to the combat, I can imagine that a lot of people will.

There are also some visual issues too that can be problematic. The dynamic camera looks very cinematic, but sometimes it can make it hard to judge where stuff is. Usually dodging objects is quite lenient, with you avoiding stuff that you’re sure you hit; but trying to touch the rings that restore your health can be quite tricky while the camera is trying to be fancy. It can certainly be an annoyance on occasion when you’re running low on health, but I didn’t find it to be too problematic as you get used to it after a while.

Aside from these issues, the rest of the game is a blast. A lot of care and attention has been poured into the game, and it shows. It’s a shame that initial impressions may be soured by that uninformative tutorial, but stick with it and you’ll have a fantastic time! 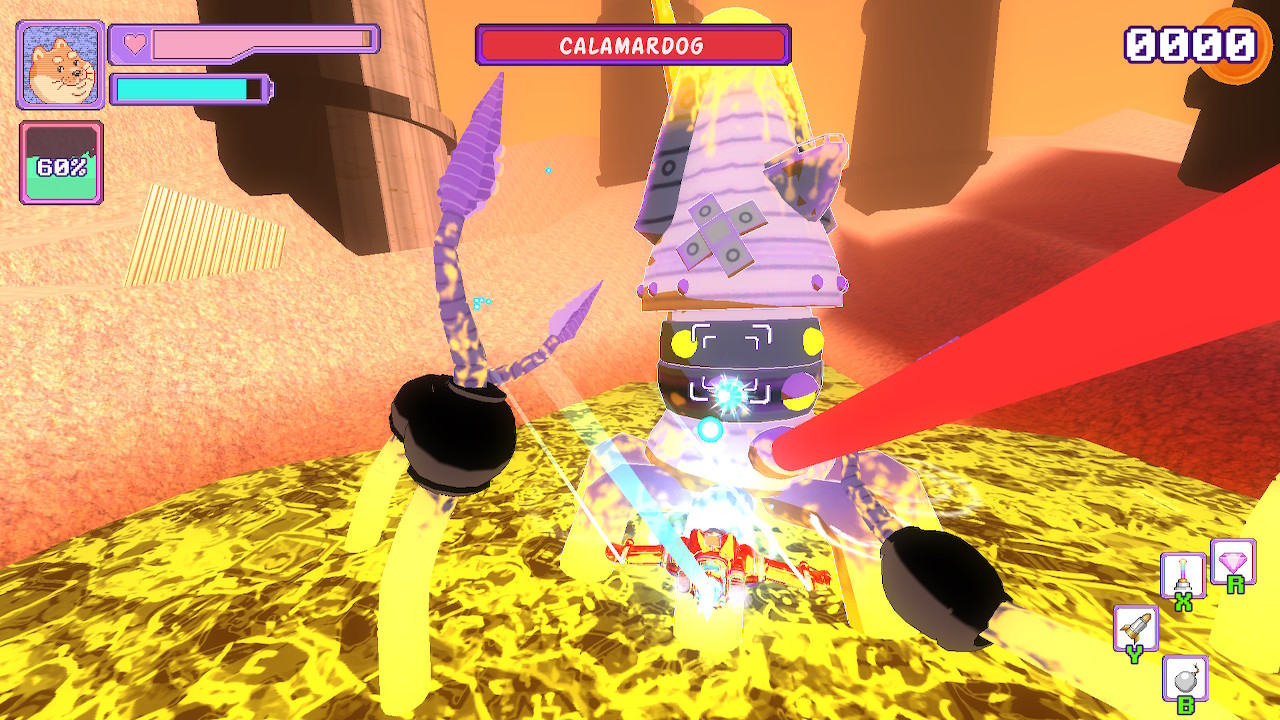 Star Fox fans rejoice! Astrodogs is that new canine-centric game you’re looking for! It may be too tough for anyone who isn’t a grizzled veteran of the genre, and there are certainly are some small nitpicks, but it’s still a fantastic rails shooter that I absolutely fell in love with. For those seeking reasons to replay, there are plenty of unlockables for those who have what it takes. Without a doubt this game is an early contender for one of my GOTY awards and I really hope it sells well on the Switch so we can see more from these furry fighter pilots in the future! 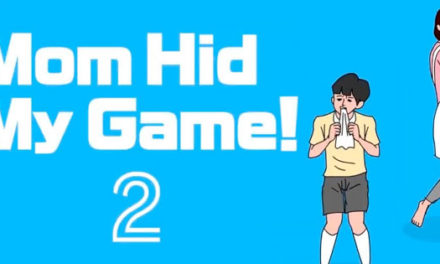