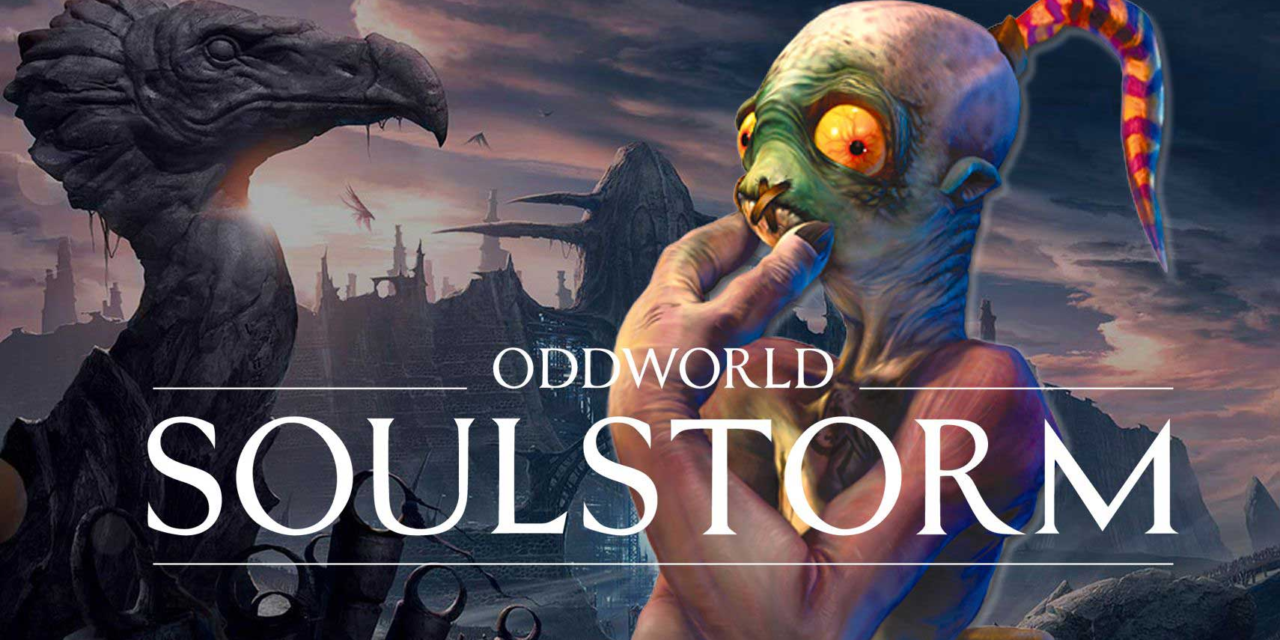 The Oddworld series has had a little bit of an unfortunate history; created by Lorne Lanning in the late 90s, Abe’s Oddyssey was a great 2D puzzle platformer that was as hard as nails and incredibly beautiful despite the butt-ugly creatures that made up its world. Introducing ‘Game Speak’, which allowed you to interact with the Mudokens you were tasked with saving, its uniqueness helped the game to stand out from the crowd. This was further expanded upon in the sequel Abe’s Exoddus… and then things fell apart once the 3D revolution arrived.

Pursuing his dream of an Oddworld Quintology, the studio then created Munch’s Oddyssey that placed Abe in a secondary role, and then Stranger’s Wrath that abandoned our freakish hero altogether. These 3D attempts weren’t disasters, per se, but fans and critics alike noticed that things weren’t quite the same level of quality. 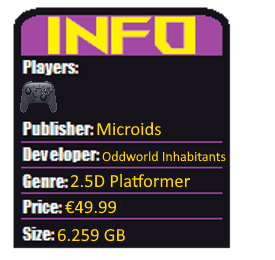 Fast forward to 2014, and the indie revolution brought with it waves of nostalgic 2D platforming – prompting the team to develop Oddworld: New ‘n’ Tasty!: a ground up remake of the original. The response was pretty positive, despite some nitpicks here and there, so Oddworld: Soulstorm – a supposed reimagining of the second game was announced.

Seeing its release earlier on other platforms, the Switch now has its own “Oddtimized Edition”. Will this be an oddyssey to remember, or will it be receiving Switch-owner’s Wrath? (sorry) 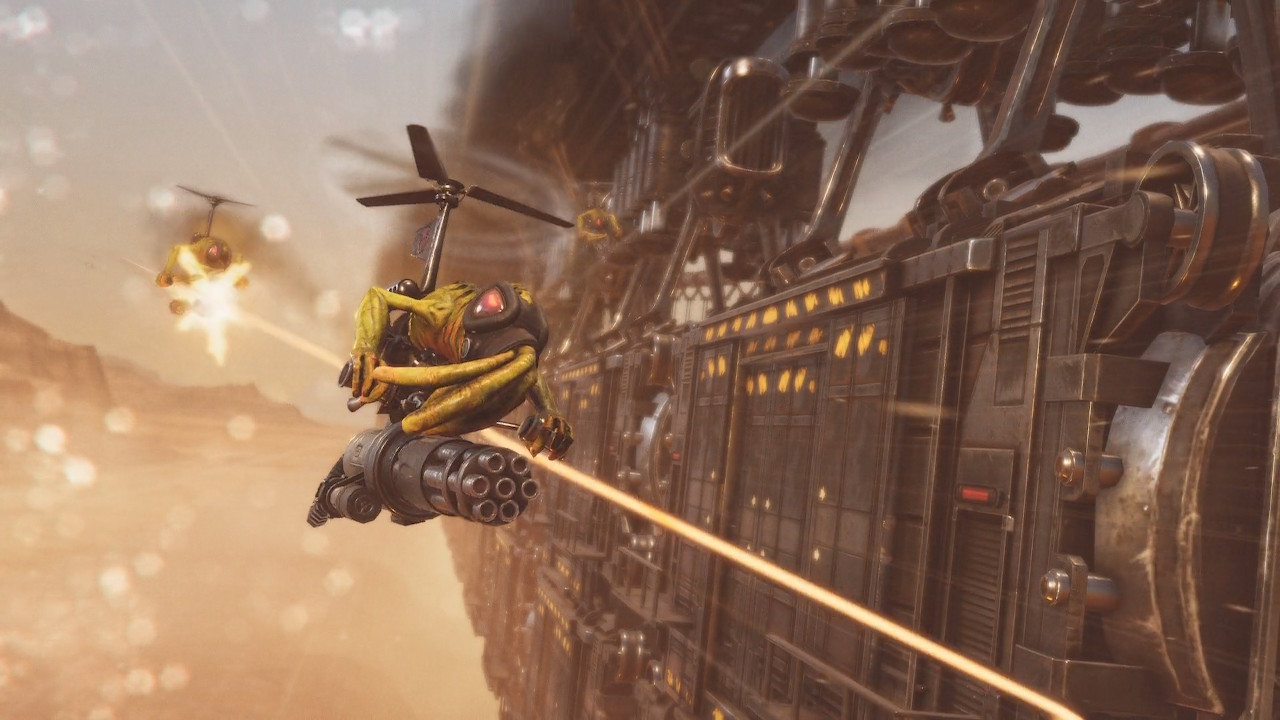 IT’S AN ODDWORLD
One of the things that endeared me to the series when I was young was the twisted world that Abe inhabited, along with the excellent worldbuilding and lore that was expertly crafted throughout. Lanning put in a lot of work to make the Oddworld both cohesive and believable, and it really shows.

For those unfamiliar with the setup, Abe is one of the Mudokon slaves that works for a meat-packing company known as RuptureFarms. One day he stumbles across their new product made from Mudokon Meat and decides its time to grab the rest of the lads and break free the shackles of their capitalist Glukkon oppressors. The remake of the original, New ‘n Tasty, was largely the same story albeit adding in an extra epilogue involving Abe’s new friend, Alf.

This is where Soulstorm kicks in, and also kickstarts one of the major points of criticism from many fans. Whilst the previous game was a remake of the original, Soulstorm is very much a complete reimagining of the second game. Those expecting a remake of the beloved classic are going to be disappointed right from the get do as they realise that the game only really shares some of the story beats and ditches a bunch of the key mechanics that Exoddus introduced. But that’s ok: Soulstorm does its own thing and feels more like a brand new entry to the series rather than a simple remake.

For starters, there’s far more story here than in the original and it feels like an epic tale chronicling the rest of Abe’s time following his factory escape. Believing himself to free from danger, he is rudely interrupted during a consultation with his shamanic friend by a hail of bullets coming from the airship of his former boss. Mullock the Glukkon is particularly annoyed by the destruction of RuptureFarms since people are claiming that it was an inside insurance job rather than the result of a Mudokon uprising. In an effort to clear his name, he’s after Abe’s skin and wants him dead. As Abe flees his hideaway, he comes across a dying Mudokon who urges him to find someone known as ‘The Keeper’, which sets him on a journey that could change the future for the enslaved race – as well as teach him more about their past.

With an angry Glukkon on his trail, a mysterious illness affecting escaped Mudokons, and many more slaves that are waiting to be liberated by their savior, Abe will have a lot on his plate as he sets off to find this mysterious Keeper. There’s a lot of worldbuilding done in this game that adds to the already vast amount created by previous games, and it all works just as well as ever. There’s environmental storytelling, NPCs to speak to, radio chatter filling you in on the rumours and ‘conspiracy theories’ going around, as well as some fantastic looking and well voice acted cutscenes bookending each stage. Some cameo appearances from YouTubers do taint the overall presentation a tad, but thankfully these moments are rare enough not to take too much shine off of the overall narrative. 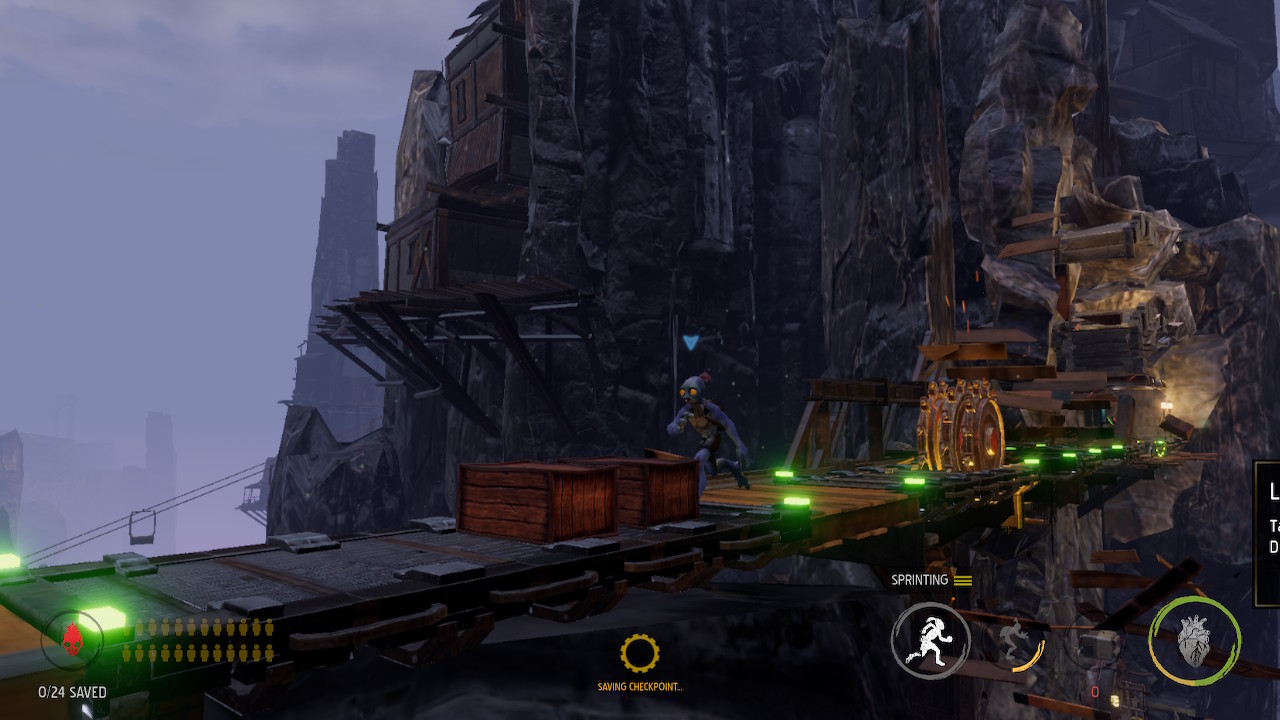 BREWING UP A SOULSTORM
For those unfamiliar with the series, the Abe games are effectively puzzle platformers with the sadistic design of a splatformer like Super Meat Boy. Rather than simply running and jumping around dangers, hoeever, the game takes a step back and requires you to think your way around things. Sure, speed and reactions are key to overcoming certain dangers, like spinning saw blades or a sniper’s laser scope, but tactical thinking is the main thing that will keep you alive.

Typically the game will dump you into a contained area after hitting a checkpoint, and you need to think about how to overcome it. Machinery and traps are certainly plentiful, with the iconic mines remaining just as stressful to defuse as ever, but Soulstorm also introduces environmental puzzles that make use of items that you can either find or craft. One such item that you acquire early on has you obtaining flammable brew that can be used to burn down barriers, or create new platforms for you to access. They’re a nice addition, even though some of these puzzles get used for a stage and get forgotten about for most of the game.

Of course, it’s not just the platforming that stands in your way either; foe are plentiful, and mostly consist of the Cthulhu-like cyborg creatures known as Sligs – who are heavily armed, but thankfully also pretty dumb too. Stealth can often be used to bypass them, but those aforementioned items can also be used to take them down too. Remember that brew I mentioned? How about using it to make your opponent a little bit more flammable before tossing a flare their way? Marvellous! There are other less violent ways to deal with enemies, but by far the most satisfying way to take care of them is by using Abe’s chanting ability to possess helpless Sligs. Doing so will allow you to take direct control of them in order to solve certain puzzles, or simply utilise their guns to clear out any other threats. When you’re done with them, you can make them explode from the inside as they cry for help. It’s incredibly satisfying, but you can only possess foes when there aren’t any chant-suppressors nearby to stop you.

All these mechanics work rather well, and Abe’s movement has been mostly refined to feel way smoother than in previous games too. His running and double jumping feels easier to do than ever, but this fluidity also makes the platforming a little less precise. In previous titles, Abe’s position and type of jump would guarantee where you would end up – even if it was a little slow and clunky. Now, you can alter your direction in mid air (even during a double jump), but it doesn’t feel very intuitive to use. Some sections that make use of that directional change feel awfully clunky and make it a lot harder than it probably should be. The game does have a certain degree of ‘snapping’ that helps with platforming, but it can still be frustrating when things don’t quite work the way you want. Especially when it results in the loss of one of your friends. 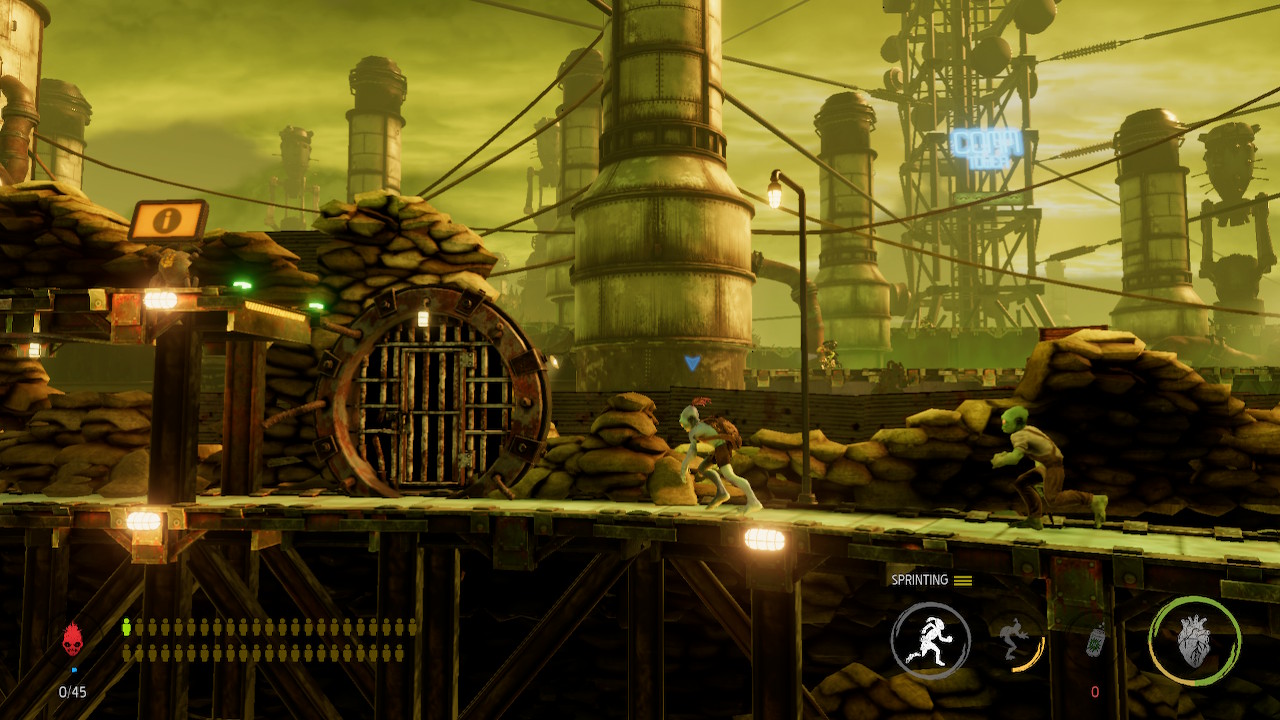 Which brings us to the other key element that definies Abe’s adventures through the Oddworld: his position as the savior of the Mudokon race. He is all about saving other slaves and guiding them to safety, which also means that you’ll be finding, escorting, and protecting them for a fair amount of the game. Those familiar with escort missions may be tensing up at the prospect, but guiding your incredibly dumb companions to the exit portal is part of what makes these games so charming – and what makes them so difficult too.

Using your gamespeak, which in this game is reduced to a mere ‘follow’ and ‘wait’ command (seriously, there’s not even a fart button in this one!), you need to instruct them carefully if you want to keep them alive. Mudokons do have a slight delay when they move, so getting them to safety feels like just another one of the game’s puzzles. The game is delightfully gory, which means that their deaths are often quite over the top, which certainly helps alleviate some of the frustration – especially when coupled with the rather generous checkpoint system too!

Saving your friends is essential to achieving the best ending (which also gives you an additional two levels), but thankfully only 80% are required to achieve positive ‘quarma’. That’s not to say saving four fifths of all Mudokons is easy though, as some levels can make this incredibly tough. There were levels where I couldn’t even find most of the slaves, and the levels where you need to save hundreds of them as they make their escape are especially challenging. Despite the frustration caused, the important thing is that I continued having fun – and difficult setpieces like this felt incredibly rewarding when I managed to save (almost) everyone.

Whilst the game is a lot of fun, especially for those familiar with the series, it’s not all perfect. The game’s attempt to modernise the series can feel a little overkill at times, with a completely superfluous medal system (that seemingly unlocks nothing) and an equally baffling crafting system that has little reason to be there.

As mentioned earlier, the use of items within the game is pretty prevalent, with items being purchasable from specific vending machines, found by rummaging through stuff, or crafted using materials that are also obtained via the aforementioned rummaging. The crafting system is pretty straightforward, with items being craftable at the press of a button providing you have the right materials, but considering you typically find or buy most essential stuff, it often just feels like a needless extra step that was added for the sake of it. It doesn’t get in the way, but it does come across as being a little pointless – especially as materials and items are reset upon level completion.

At the end of the day though, the issues didn’t affect my overall enjoyment with the game nor do they necessitate any fixing. The real crux will be down to whether or not this style of game is for you. Does the thought of a brutally hard puzzle platformer (albeit one with checkpoints aplenty) sound frustrating? Do you mind not getting 100% completion (or heck, even 80%) in each level? Well, think again. Still interested? You may find a great game for you here. 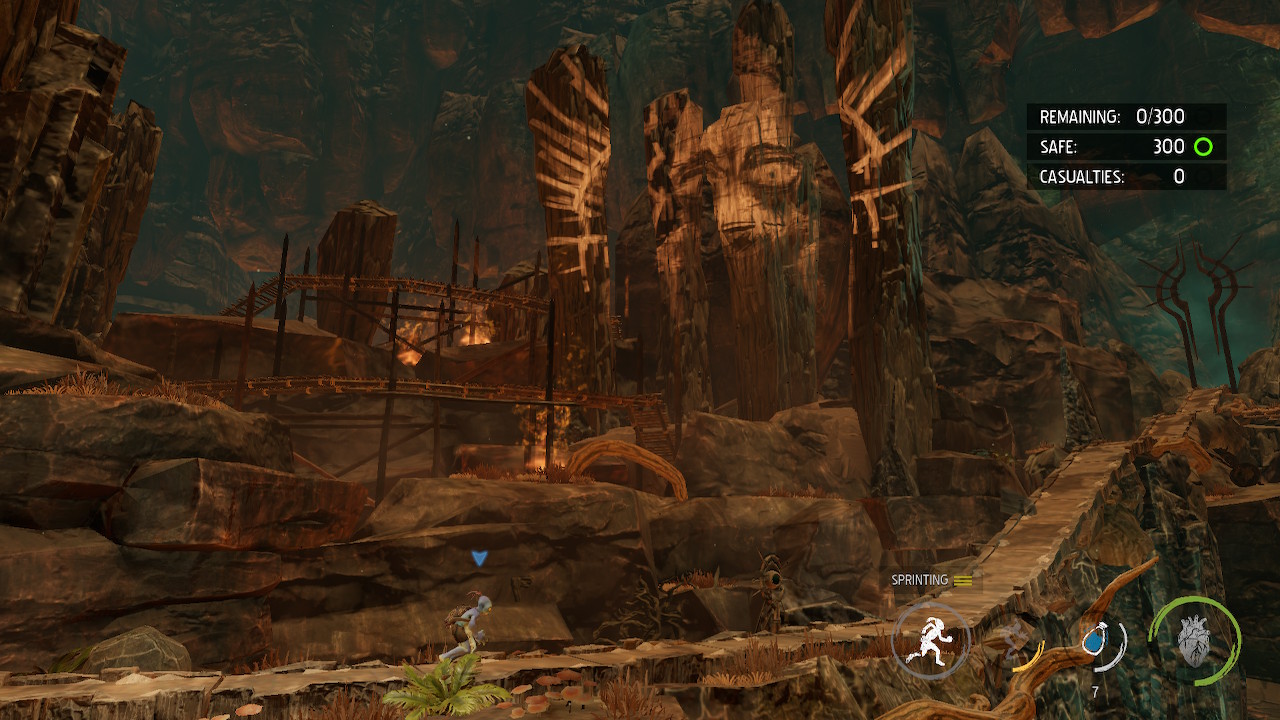 Oddworld: Soulstorm is one of those miracle ports that both looks unbelievably impressive for the hardware it is on, and performs damn well too. It’s difficulty and reliance on guiding dumb Mudokons may not be for everyone, but it’ll certainly prove a great time for those who are up for the challenge. 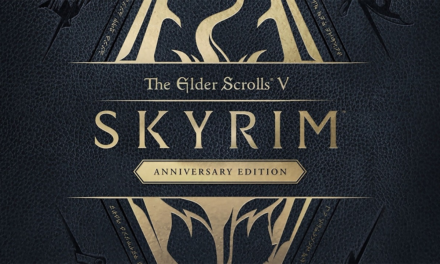