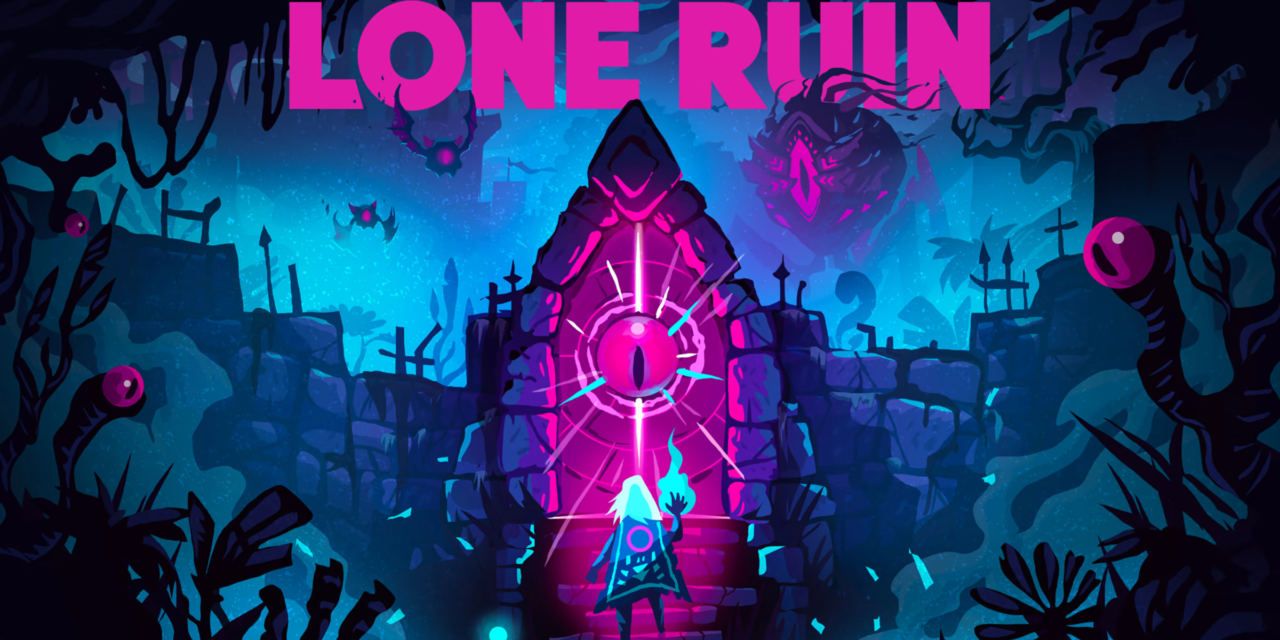 Many thanks to Super Rare Games for the review code. 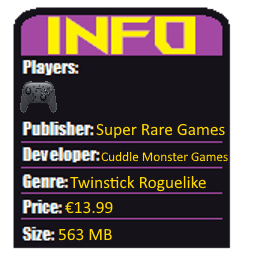 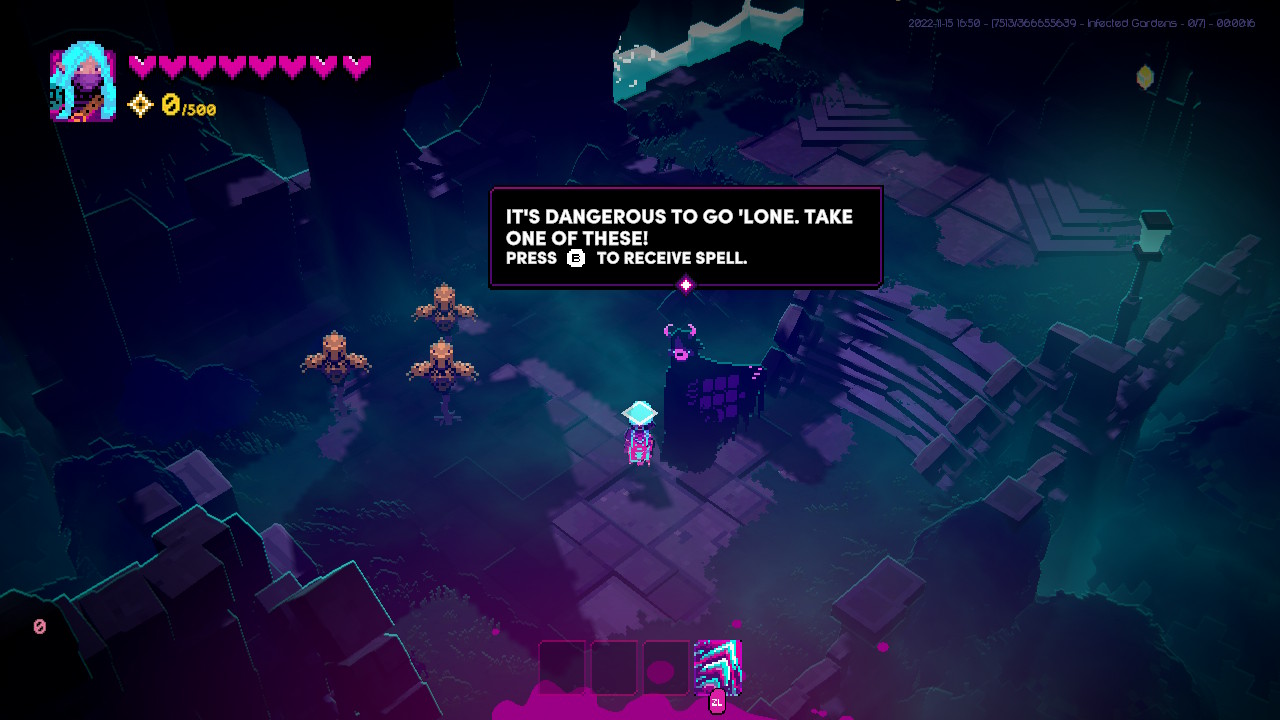 ‘Roguelike’ can be a dirty word for many people, including myself; however, my time at the site has also allowed me to discover just how broad the genre can be and also how appealing some of them really are. At the risk of sounding like a genre-ist, some of my favourite games really are roguelikes. That being said, making a good one isn’t as easy as you’d think – and there are many examples that fall flat in different ways.

The one thing that can really help many games in the genre is a strong aesthetic, and that is what drew me to Lone Ruin. Despite not looking like anything particularly special from a gameplay perspective, those beautiful purple visuals made it hard for me to resist.

Will I regret my decision to give this one a shot?

IT’S DANGEROUS TO GO ‘LONE. TAKE ONE OF THESE!
Foregoing any kind of actual plot, Lone Ruin instead paints a picture of an ancient city teeming with magic that your explorer character finds themselves in. Seeking the mysterious power, you venture further into the depths accumulating magical spells as you work your way to the heart of the titular lone ruin.

Just what is this corruption that is everywhere? What are these creatures that seek to tear you apart? These are all questions that the world that may be answered should you reach the centre … but don’t expect any other kind of plot development in the meantime. 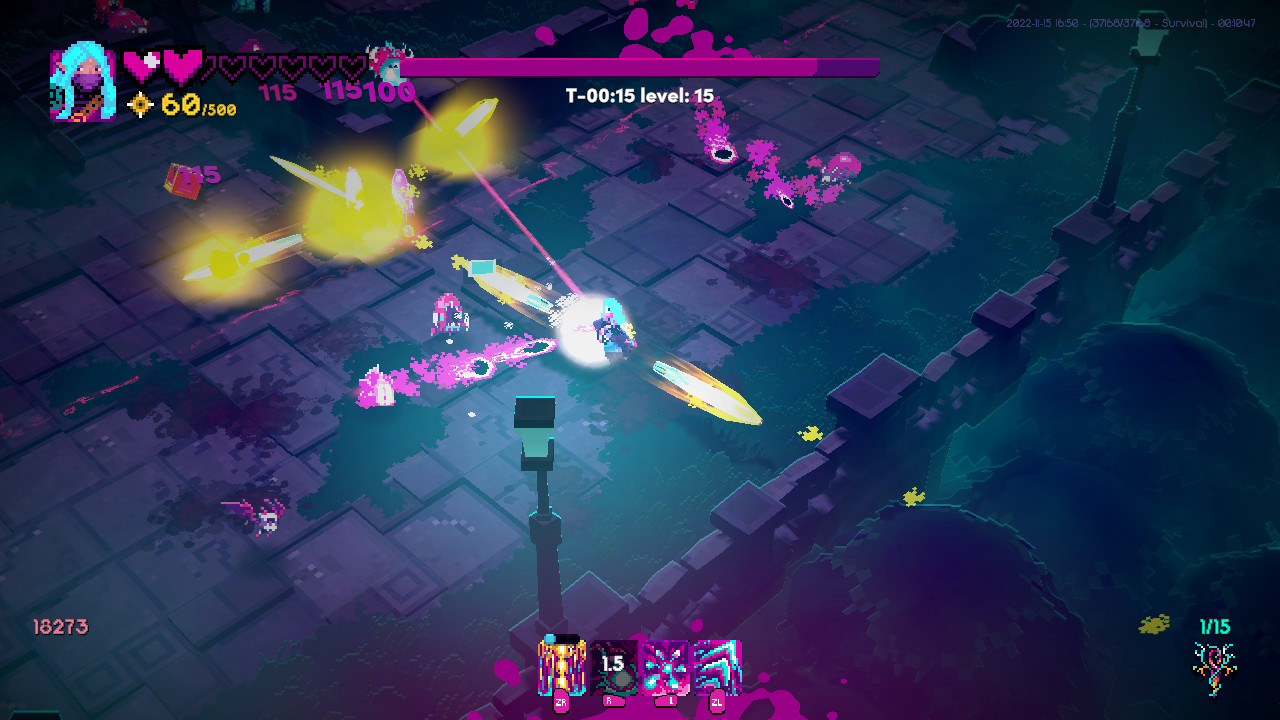 RUINATION
The concept behind Lone Ruin isn’t exactly a unique one for the roguelike genre: utilising your spells, you defeat waves of enemies in each room via the twinstick controls and try to buff your character’s offense and defense enough to be able to reach the heart of the ruin. For anyone that has played any roguelike in the vein of The Binding of Isaac should have a fair idea of how the game plays before they even start the game.

That’s not necessarily a bad thing, however, as that game is beloved for a reason and Lone Ruin certainly does enough to set itself apart from the game that inspired it. Aside from the aforementioned gorgeous spritework, the game’s focus on magical spells certainly helps give it its own identity. You start off by choosing one potential spell (some of which will be randomly given a free upgrade) that accompanies your dash; as you proceed, you can acquire further abilities and upgrades that will help make things easier. The upgrades you’ll acquire after clearing each room is made clear before you even enter, which adds a bit of welcome strategic play as you create your build of choice. My particular favourite spell was a laser that ricochets between enemies, which can be upgrades to do massive damage to all nearby foes, but there’s quite a few cool ones on offer for you to experiment with.

What makes these spells even more satisfying to use is the game’s super tight controls. Attacks feel meaty and aiming at your foes is an absolute cinch. The dash move isn’t quite as well-implemented as everything else, but it’s still as functional as it needs to be most of the time. There can be moments when the screen is filled with enemies and projectiles that the dash can feel unreliable, but that seems more like bad enemy RNG more than anything.

Speaking of which, foes in Lone Ruin are all really beautiful to look at – even if the enemy types are all rather generic. You have your stationary enemies that fire a ring of projectiles, there are fast swarming enemies, little critters that take potshots at you, and so on and so forth. They’re good enough to act as fodder, but I wouldn’t say any of them are a particular highlight. Bosses, on the other hand, are a bit more creative, even if there are only three in the game to fight. Despite not being anything particularly revolutionary, they’re inventive and fun enough to be one of the high points of the game’s short main campaign. 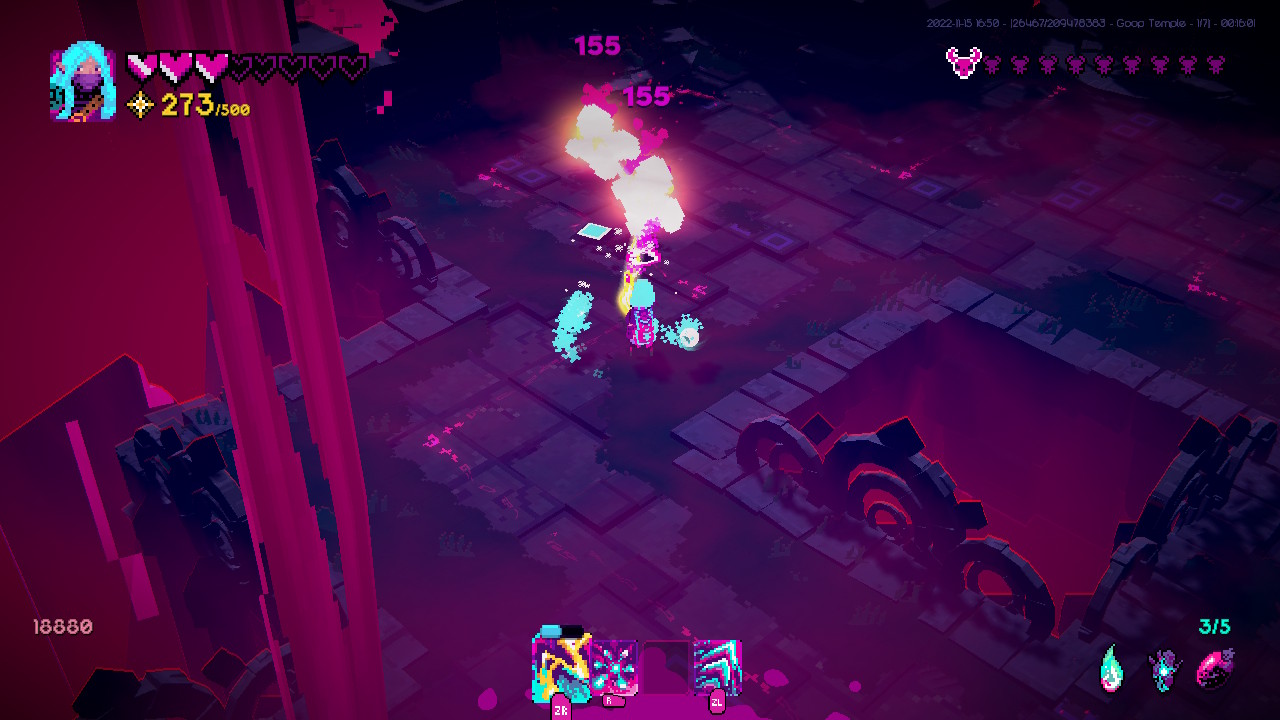 Also included is a survival mode that takes the general gameplay mechanics but has you surviving ten minutes against an onslaught of enemies on a single map. Combat still feels largely the same, except the waves of enemies never end and also get progressively harder too as you continue your fight for survival. To make things even harder, your selection of starting abilities is drastically reduced – although powering them up is actually far easier than the main game. Rather than unlocking upgrades after clearing a room, instead you’ll be given a choice of three upgrades after collecting a certain number of coins from dropped enemies. Upgrading happens with alarming frequency and makes you feel overpowered in no time, even if the enemy threat starts to get more and more overwhelming as the time foes by. There are three difficulty modes on offer, with even easy offering a decent challenge, so I found this to be the preferred way to play through the game for a quick bit of fun.

That’s not to say the story mode isn’t fun, but it’s also far more punishing in the standard roguelike way. Whilst veterans of the genre will probably get through it with relative ease, I found myself getting close to the end … but never quite reaching it. With many projectiles on screen, it can be tough to dodge through all the bullet hell as the pressure mounts. This difficulty is what ultimately stopped me from beating the main story (hence the ‘in progress’ tag), but I’ll certainly keep coming back for more due to the great controls – assuming I can tear myself away from the survival mode, of course! 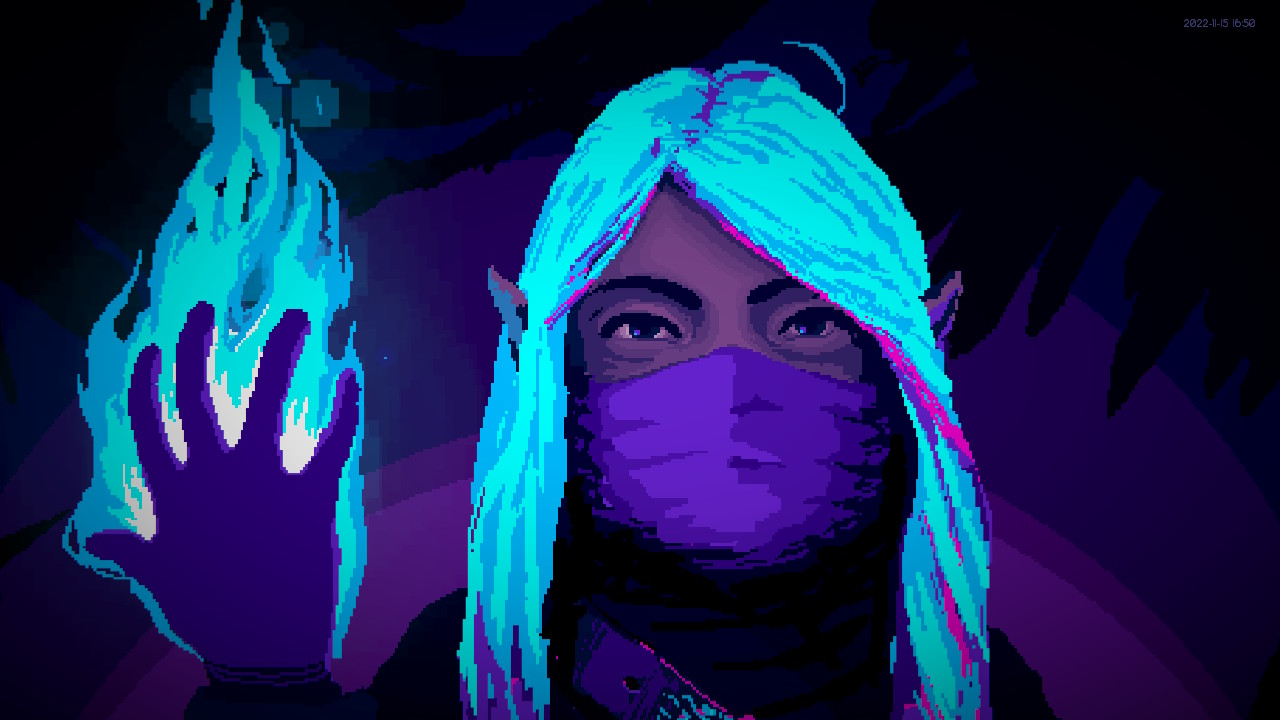 Twinstick roguelikes aren’t usually my cup of tea, and Lone Ruin certainly doesn’t offer that much to make itself stand out from the games that inspired it. However, the beautiful visuals and tight controls are what kept me hooked. If you’re looking for a reasonably priced roguelike that offers quick paced fun, you could do far worse than Lone Ruin. Check out my pathetic first run for a taste of what the game has to offer! 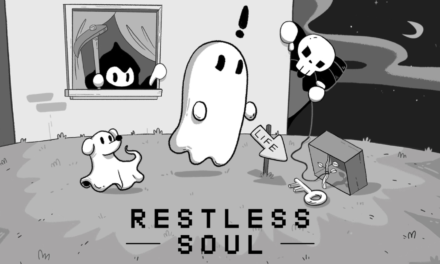 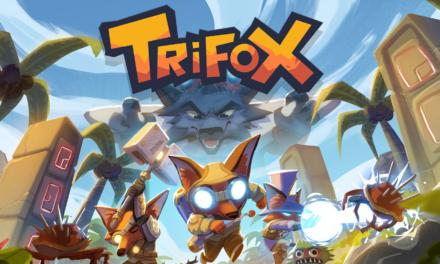 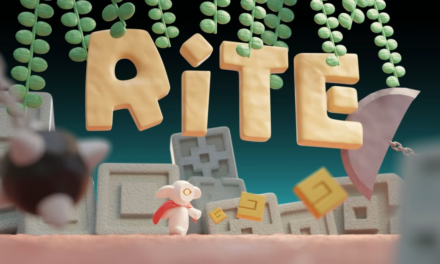 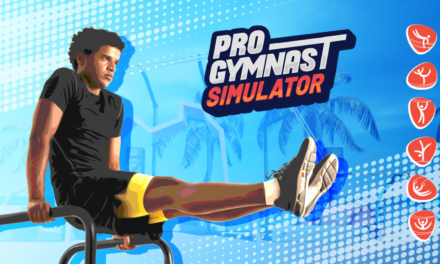